Well I have to begin by saying that it’s not been an entirely jolly week for me at Stockham Farm – despite spending an enjoyable couple of days ascertaining the quality of the new hay and straw bales in the top barn (no mice whatsoever – most disappointing), this was also the week when I had to bid farewell to my best friend, Toffee. 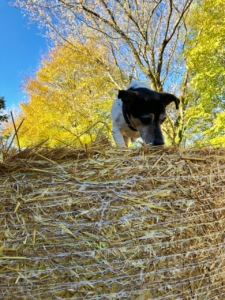 Toffee is a Shetland Pony.  Like me he is incredibly charming and good looking, and I’ve genuinely seen humans that haven’t given a second glance towards the big horses, go all gooey and unnecessary when they see Toffee.  We had some great dogs that brought their humans to stay at the farm during the summer and they all loved Toffee – rushing back inside the cottage to find carrots and picking apples from the orchard to give to him.  This picture is of a grown man stroking Toffee – I do get it, but enough now! 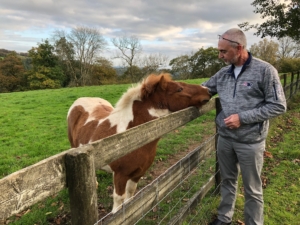 But let’s be frank, Toffee does have two really big issues… firstly, he’s not very tall.  TOERAG (one of my humans – The One Earnestly helping me Renovate Ancient Granaries etc) has helped me create a lot of nice stables for all the horses and ponies that visit Stockham Farm – we’re hoping to become an official British Horse Society ‘Horses Welcome’ destination soon.  But no-one was prepared for the smallness of Toffee – here he is trying to look over the stable doors when he came indoors the other evening.  Not ideal, I’d say. 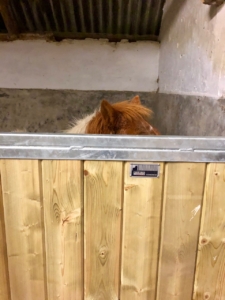 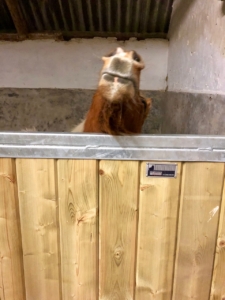 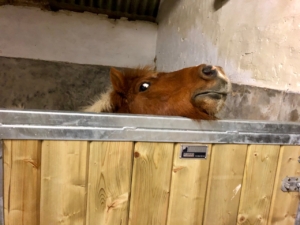 The second issue is… well, he looks like a girl.  Be honest, you thought so too, didn’t you?  Everyone always refers to him as ‘she’ – even the big horses when they first met him.  He coped with it surprisingly well and wasn’t at all perturbed when Bailey laughed out loud when Jack told him that Toffee is actually a boy. 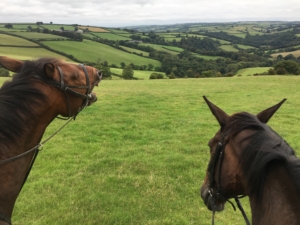 When Jack was depressed…

Jack and Bailey are also sad that Toffee has left us – especially Jack.  He was rather depressed and lonely in the summer of 2017 and that’s when Toffee came to Stockham Farm to cheer him up.  A bromance blossomed and he made Jack feel a lot better and brought lots of fun to the farm – chasing rainbows and rolling in the snow. 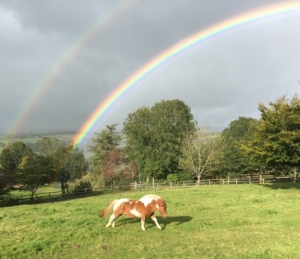 He even hung out with Jack in his stable during the big snow last winter – practically twins they were, as you can see below.  But I was worried that he wouldn’t want to spend another winter here – now that Jack has Bailey to chat to and share jokes with, Toffee was feeling a bit like an equestrian third wheel.  So I suggested he might want to move on. 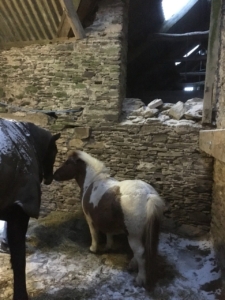 As you can imagine, Mother doesn’t really care that Toffee’s gone; she couldn’t really see him very well, what with her dodgy eyesight and everything, and I don’t think she cares that I’m upset either.  He left on Thursday morning and I was at least glad I got to say a proper goodbye (there’s a video on my Instagram page @exmoor_jack_russell_ralph).

TOERAG told me that Toffee’s going to be really happy in his new home – there are two big horses that aren’t rude and won’t laugh at him, and a very small human that’s going to ride him.  He said that the small human is 7 months old and called Wilfred, which is a very cool name, and I imagine he’s very brave too as that’s really quite young to be riding.  As you know I rarely believe anything TOERAG says, so I’m not sure this can possibly be true – but if I can get a picture of Wilfred riding Toffee then I’ll definitely post it on my blog or on my Instagram page.  Wilfred’s mother has already sent me this picture of Toffee with his new big horse friends – I think he looks pretty chilled (if rather upside down), so I guess it’s all going to be OK.

I think I’ll now go and sit by the Aga and wear my very sad face – that usually elicits a commiseratory lump of Cheddar.  Definitely worth a try…