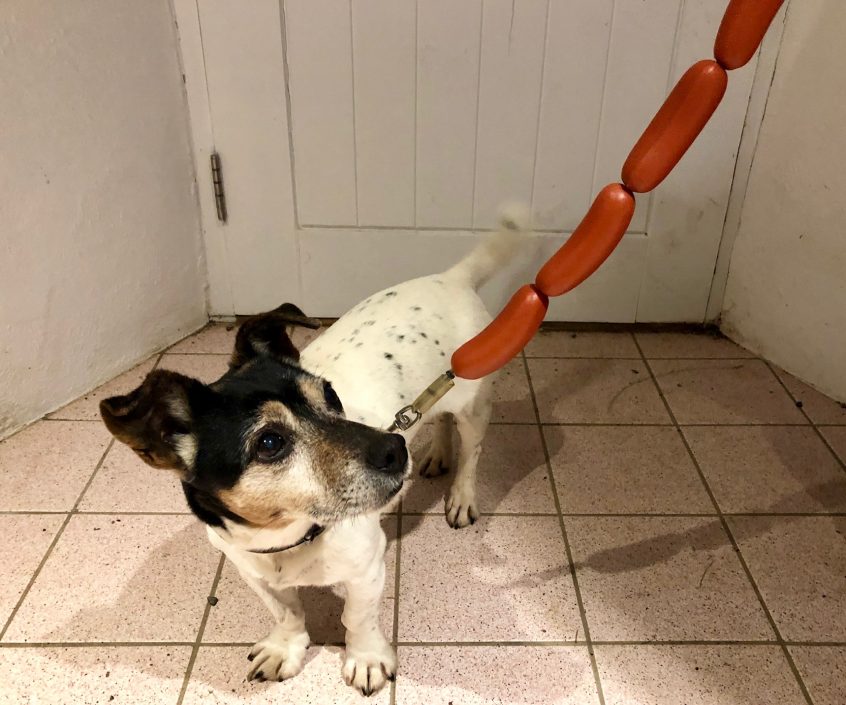 I wish I could begin this blog post sounding a little more hale and hearty, but regretfully I’m of the opinion that (despite the Season of Goodwill being nearly upon us) we’re all going to hell in a handcart.  Actually that isn’t my phrase, I’ve picked it up from TOERAG (that’s an acronym for my male human).  I asked Mr Google what it meant and he said:

To be in an extremely and increasingly bad or ruinous condition; to be on the inevitable path to utter failure or ruin.

I think that might be taking it a tad far because, after all, I do live at Stockham Farm which is nothing short of an exquisite corner of heaven, in the heart of the Exmoor National Park on the border of Somerset and Devon and I have everything a dog could wish for in life.  More importantly, I also have made some delightful dog friends that have come to stay for self-catering holidays here (and bring their humans, of course).  Here’s a pic of Dennis who came to stay in the summer and spent a long time lounging attractively on the big lawn admiring the view over the Exe Cleave.  So actually not a bad life…

A Hard Biscuit or a Soft Biscuit?

…BUT, if life is so good, why oh why won’t everyone stop looking terribly worried and constantly talking about BISCUIT all the time! Curiously they now pronounce it BREXIT, which is unfathomable as I thought they were quite good at English.  Initially there was a lot of talk about a choice between a Hard Biscuit and a Soft Biscuit which I fully understand is a difficult choice – I’ve always been a Shortbread or a Digestive dog, but with my recent teeth issues, I probably do now prefer a Jaffa Cake.  In fact, a Jammy Dodger would work well as it combines a hard outer with a soft inner. But my point is, there are all these important deliberations going on in the house, and then none of these Biscuits (or Brexits) actually materialise!

There’s also endless Biscuit chat on the square telly box and TOTCA (my female human) and TOERAG stare and mutter and then very recently they’ve begun talking about the possibility of NO BISCUIT!  WHAAAAT?!!!

Back to the Vet!

Whilst pondering the proposed complete absence of Biscuits in my life, I discovered that TOTCA had made yet another appointment to take me to the Vet recently.  The nice Lady Vet was there again and took my picture because she said (quite understandably) that I was a very handsome Jack Russell Terrier.  How embarrassing though that she took the photo whilst TOTCA was on a lead made out of plastic sausages!  Not real sausages, but PLASTIC sausages!!  I think you’ll agree that I look rather disdainful in the picture at the top of the blog.

I’ve become aware that the Biscuit/Brexit talk is often linked to a discussion about being in a  continent called Europe, which is actually where some nice guests came from in the summer.  Now this is confusing because Mother is also in a continent (though TOTCA pronounces it ‘incontinent’) and this is deemed not to be a good thing and involves a lot of kitchen paper and TOTCA saying “whoopsie” and TOERAG eventually saying “I’ll take her outside”.  And then he takes her outside and they sit on the bench together and look at the view and have a cuddle.  Above is a picture of the two of them on the bench looking happy together.  So I’m stumped: is being in a continent a good thing or a bad thing?  Who’s to know?

The latest discussions have been about a lady called Mrs May and an Irish backstop.  Now I can only assume this is about playing rounders on the beach at Putsborough Sands in North Devon.  Putsborough Sands is beautiful (here’s a pic above taken in late October) and is only a 40 minute drive from the farm.  Rounders is a terrific game for all the family involving a bat and a ball – and there’s always someone who’s the backstop and catches the ball when someone can’t hit it. It’s great fun and I’m always incredibly helpful catching the ball when someone does hit it and then refusing to give it back to the humans unless I get a biscuit in return.  But why the big discussion about rounders now in the middle of December?  Is Mrs May having rounders lessons?  Is she coming to Putsborough one day soon?  Does she have an Irish friend that will act as the backstop?  Most importantly – will she bring Biscuits?

If you can help me with answers to any of these questions, I would much appreciate it.  By all means get in touch via my Instagram page Ralph, Exmoor Jack Russell or send a pigeon or something.

In the meantime, I’ll go and have a look in the Biscuit Tin.