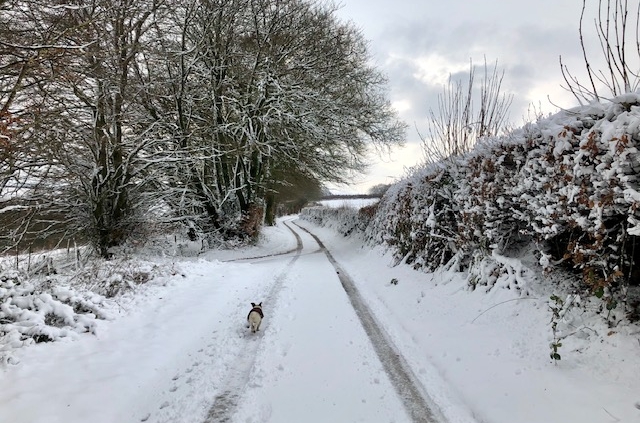 Whilst lounging in my favourite chair this morning watching the buzzards being beastly to the frogs on the big pond at Stockham Farm, it occurred to me that it had been some long while since I had contributed to my blog.  My apologies for this, but I regret that I’ve been somewhat preoccupied in 2019 to date.

Very sadly we lost Mother on 1st February.  She hadn’t been well throughout January and then at the end of the month, we could all see that everything was going very wrong indeed.  You may recall that Mother could no longer really see or hear anything and that her bladder control had never been exactly award-winning; well basically on 31st January it went completely.  So TOTCA and TOERAG (acronyms for my two humans) spent an awful lot of time talking quietly with water coming out of their eyes and their noses turning red; and then latterly drinking a rather nice single malt Scotch to “say a proper farewell” in Mother’s favourite spot amongst the daffodils at Stockham.

When we said farewell to Mother

Mother was 16 and a half years old when she died (115 in human years) and she’d had an amazing life.  She was born in Dartford in Kent – making her a Kentish Maid as opposed to a Maid of Kent (because she was born to the west of the River Medway, not the east).  She left there to live in Hever in Kent, then Tunbridge Wells (where I was born), then Chiddingstone, before finally moving to Dulverton in the Exmoor National Park.

She was very small, but very feisty.  She can be seen here challenging her BFF Otto (of mixed German heritage – Doberman/German Shepherd/Rottweiler) for control of a very large stick.  Apparently Mother won.

She taught me everything I know – how to catch rodents in barns and under haystacks; how to feign complete ignorance of your own name when hearing it called; how to jump onto a bed with muddy paws; how to remove carrots from the big horses’ feed bowls (whilst they’re actually eating!) – to be fair that is something Mother alone could do, I haven’t mastered this skill yet.

And here she is again a few years later, having proudly won a battle with a weasel.  Although TOERAG thinks this was a stoat.  It’s an ongoing debate at Stockham and even Mr Google hasn’t been too helpful, merely offering this poem to clear up any confusion…

A weasel is weasly recognized
A stoat is stoataly different

Mother’s passing coincided with some serious snowfall at Stockham – not quite like last year’s Beast from the East, but still very cold and white.  TOERAG and TOTCA quite like the snow – in fact they go in search of it saying they’re going “on a skiing holiday”.  Now I’m not entirely sure what is meant by ‘skiing’, but the very clever Border Collie across the valley has said that it is when humans strap planks of wood onto their feet and throw themselves down snow-covered mountains very fast.  I can’t believe this is true, because, well, why?!! – but I’m putting it out there in case anyone can tell me otherwise.

During this recent snowfall, TOTCA and I were despatched to Dulverton along the lane in search of essential provisions  – milk, gin, wine, chocolate – I can be seen in the picture at the top of the page leading the way, wearing my sensible winter coat.

The snow has all gone now, but I thought I’d leave you with this picture taken on 2nd February beside Mother’s resting place – our view from Stockham Farm of the highest point on Exmoor, Dunkery Beacon.  I miss her very much, I do.