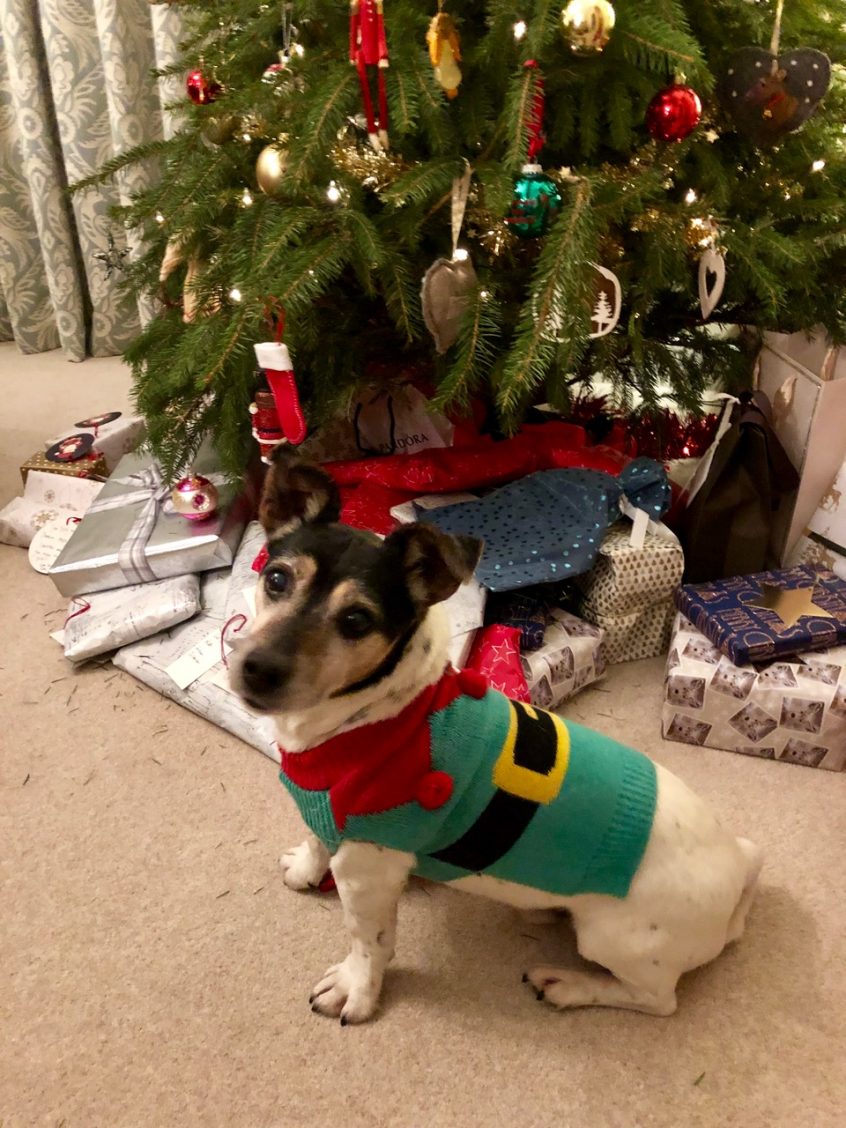 Now I’m confidently saying “Readers” in plural as I’m absolutely certain that I now have more than just my elderly mother reading my blog.  I’ve heard on the grapevine that the father of TOTCA (that’s an acronym for my female human) has also been seen reading it.  This gentleman – who, confusingly, seems to have various names such as Dad, Grandad, Great Grandad and Horace (named after a Golden Retriever, I believe; or it might have been the other way round) – is 96 years old.  In human years.  Which makes him 672 in dog years! Older than Mother I think.

I mention TOTCA’s father because the Season of Goodwill is now officially upon us and this is apparently the time for “Family” and “Festive Fun”.  There is quite a bit of Festive Fun going on at Stockham Farm – trees indoors, sparkling lights hanging from the red deer antlers that were found on the farm last year and TOERAG (an acronym for my male human) spending a lot of time standing by the Aga with cinnamon mulling wine.  I’m not sure why he’d mull over whether or not to drink wine at Christmas – he does it quite happily throughout the rest of the year.

Anyway, Festive Fun is great and with my merry disposition I’m happy to join in… but only up to a point.  And that point was reached yesterday when I was asked to sit under the Christmas tree dressed as one of Santa’s elves (as can be seen above).

Now I know Santa is a real human being  who lives with lots of reindeer somewhere that’s even colder than Exmoor in the snow, but I wasn’t aware that he employed Jack Russell Terriers to assist him.  If this is to be my new role on Christmas Eve I feel I need a tighter job description.  Will I wear this uniform the entire night?  Do I need to learn the names of all the reindeer before we set off?  Will I have to actually hurry down the chimneys or can I stay in the sleigh?  Will I be allowed to eat the sausage rolls in the fireplaces or will I have to share (to be fair, Santa does look like he’s had enough already)?  What if Santa gets stuck in the chimney?!!!  Seriously, is there an official emergency procedure in place?

Fortunately, a few members of the Family have come to stay for the Christmas period and I expect they’ll be able to give me some answers.  I’ve asked Mother and she’s not been hugely helpful on the subject – apart from saying it could be worse, I could be taken out in public dressed as a Christmas pudding as took place in 2016.

Even TOERAG struggled to see the Festive Fun in that.  TOERAG’s idea of Festive Fun involves a traditional seasonal blend of watching Love Actually in front of the fire, carving roast beef (I’m always close by to assist him) and wearing a crown made out of thin paper; followed by hiding in the stables for some considerable hours preparing the big horses for something called “Boxing Day” which doesn’t appear to have anything to do with hitting anyone with big gloves on.

TOTCA is at her most Festive when holding a glass of something with bubbles in it whilst singing about a good King called Wenceslas who took a mate of his (a Mr Page) out in the snow to give a poor man (a Mr Peasant) some bread and wine and pizza – cooked deep pan, crisp and even.  I think that’s the story.

Mother and I often choose the Festive Period to make ourselves useful with various Family members by offering our services as iPad and laptop supports on the sofa – we hate to be accused of lounging around doing nothing.

A couple of years ago, Mother and I were both formally accused of committing treason as we fell asleep in front of Her Majesty’s speech on Christmas Day.  But that was when we were in Kent and I don’t think anyone at the Tower of London knows that we’ve now moved to a farm on the border of Devon and Somerset.  We’d quite like to keep our heads, so please don’t tell.  We do actually rather like the Queen, albeit she seems to prefer Corgis to Jack Russell Terriers.  TOERAG used to have Corgis that looked after him many years ago – he said that they’re “excellent cattle dogs”.  I don’t dispute this, but I’d like to know if their skills set ever had them assisting Santa on Christmas Eve.  Helping Santa or helping Her Maj – which do you think is the most challenging role?

That’s it from me for now.  I’m just going to take another admiring look at the Jack-Russell-in-a-hat-in-a-bauble that’s hanging from the antlers above the fire.  Festive Fun decorating at its very best.  If you’re at a loose end, do follow me on Instagram: Ralph, Exmoor Jack Russell