I’d like to thank all the kind readers (at least two, I believe, both human) that have said nice things about my blog.  Before I write much more about the goings on at Stockham Farm, I thought it might be helpful to introduce some members of the family to you.  And my mother in particular.

The picture above is of the two of us – vaguely pretending to like each other to amuse the humans.  As you know, I’m the handsome one on the left, Mother is on the right.  She has completely ridiculous ears and is possibly quite embarrassed by them, though she won’t admit it. 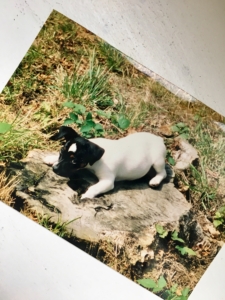 Here’s a picture of Mother as a puppy (sensible ears then).  This was obviously taken a long time ago, as Mother is now 16 years and 3 months old in human years.  Which makes her 114 and a half in dog years.  She was born on the 4th July, so the humans named her Liberty.  This has something to do with America which I’ve heard is quite a long way from Exmoor; but I’ve also heard that Americans quite like Jack Russell Terriers so it must be a nice place.

The story of my birth

I was born 12 years ago in a nice house in Tunbridge Wells in Kent.  My female human (the one they call Ali) was there helping Mother with the whole unsavoury business, and I think all was going well (2 brothers, 1 sister) until it was my turn.  I was a breech birth apparently and the books didn’t cover this, so I understand there was a lot of panicking and pulling and drinking wine until I arrived safely.  This is the story I’ve heard, though I must say I’ve never seen Mother drinking wine, so I assume that was what the humans were doing. 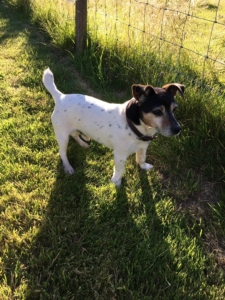 I had an excellent puppyhood until the day we moved into our new house in Hever in Kent and I had an altercation with a badger in his own home and he removed much of my right ear, as you can see from the picture above.  I still can’t understand why the humans were so upset when I showered the hallway with blood from my ear only two hours after we all moved in.  Something to do with “newly decorated throughout” I think.

Mother continues not to help…

We’re all busy getting on with the “renovation” of the Piggery house at Stockham Farm, and can’t wait for some new dog friends to bring their humans to have self-catering holidays here next year.  Although I have to say that Mother isn’t actually helping much at all.  I found her looking at herself in a mirror this week, when she could have been doing some important digging or something.  The humans keep saying that she’s old and deaf and blind, but she still knows whenever and wherever I’m in the room, so I’m not so sure.  She won’t be pleased that I’ve added this picture, as her sticky-up ear looks particularly ridiculous! 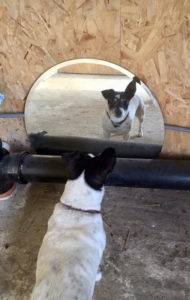 I must sign off for now, as my humans have some friends coming to Stockham Farm from Kent for the weekend.  They all live with relatives of mine, which is very nice, so there’ll be lots of chatting, wine-drinking and crumb-dropping under the table.  Perfect!  My humans are doing a lot of “tidying up” in readiness for their friends and Mother’s just fallen asleep on top of some rubbish.  I’d better go and wake her up… 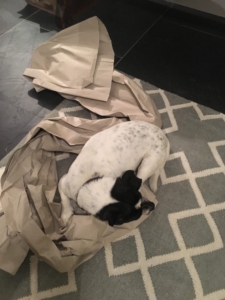 Ralph explains the Twilight Bark on Exmoor
Scroll to top