If you’ve ever seen (or read) 101 Dalmatians – possibly the scariest film ever – you’ll know all about the ‘Twilight Bark’, when dog friends contact each other across the world in the early evening with top news stories to be shared from home to home.  I think it’s a bit like the Six O’Clock News that humans watch on the big screens, but clearly they don’t understand what we dogs are doing – they probably think we’re just shouting, but actually it’s really important.  I mean, how else would those ninety-nine spotty puppies have been rescued if it hadn’t been for the Colonel’s listening skills?

Better use of English grammar…

During a recent Twilight Bark, the Border Collie from across the Exe Valley decided to teach us Dulverton and Exmoor locals a better use of English grammar.  Border Collies are exceptionally gifted dogs, as you’re probably aware, so goodness only knows why they spend such a lot of time around sheep.  Anyway, the lesson we learned that evening was all about the use of acronyms, which I have now decided to put into practice in my blog – and thus henceforth I shall be referring to my two humans as TOTCA (The One They Call Ali) and TOERAG (The One Earnestly [helping me] Renovate Ancient Granaries [and other buildings]).

I’m pleased to report that TOTCA and her friends from Kent had a fun weekend together, drinking wine and making a lot of noise.  She took them to see the work I’d done so far with the Piggery renovation project at Stockham Farm and they were all very impressed, particularly the digging I’d done at the side of the path – though TOERAG said that it wasn’t in the right place and it was a “bloody big hole”.  Does that mean he was impressed too, I wonder? 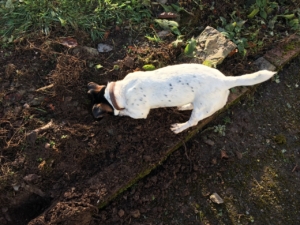 When I ate something I shouldn’t…

In amongst all the fun and excitement, however, I did something unwise – I ate something I shouldn’t.  It was an interesting grey blob that I’d found around the back of the stables with a delightful perfume of fox poo blended with dead mouse.  I wolfed it down without a care, but irritatingly my stomach began to gurgle and it came back up again later in the evening – just when I’d got comfortable in front of the fire on my favourite rug. 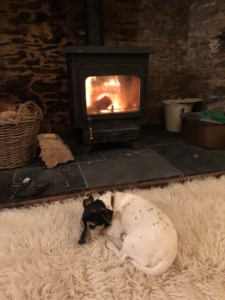 Still feeling unwell in the morning, TOERAG said he was going to take me to “see the vet”. Those three words are enough to put the fear of God into any self-respecting Jack Russell Terrier.  After all, who wants to be crammed into a room the size of a small stable with elderly Labradors saying “oh dear, sweetie, what’s the matter with you?” and young Spaniels showing off about how many pheasants and partridge they’ve “picked up” this season? Frankly it’s all a bit much, and none of them seem to comprehend that when a Jack Russell snarls, growls and makes the ground move akin to being in an earthquake, that that is simply our way of explaining that we’re actually bigger than them, but God just put us in smaller bodies.

The Postman has a cat…

Anyway, all was going fairly well until the Postman came in… with a CAT! Yes, you read that right, a cat.  The man person who drives the small red vehicle and hangs around our back door six days a week appears to let a feline share his home! Seriously, why?!  He must know that dogs provide all possible intelligent and amusing company – every day he witnesses our Oscar-winning displays of snarling, growling and barking, followed by effusive licking and tail-wagging when in receipt of a pat or a small biscuit – why then would he ever want to share his life with a cat! I confess I was acquainted with a cat once, long ago – I tried to have an intelligent conversation with it on the subject of mice, but it ran up a tree and refused to come down. I stayed at the bottom for many hours shouting at it to come down and continue the conversation, but inexplicably it just stayed there. Baffling!

Fortunately it was finally my turn to chat to the vet, who turned out to be a nice young lady person and TOERAG suddenly became all smiley and unnecessary.  She didn’t appear to be too concerned about my condition, but couldn’t resist the temptation to take my temperature just to be sure I was on the mend.  I can promise you I am NOT telling Mother where she put the thermometer – some things are just best not shared. 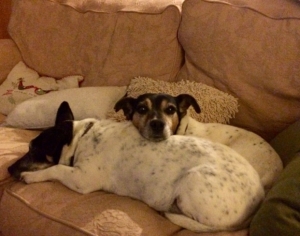 If you’ll excuse me, I’m going to join Mother on the sofa now for some further recuperation.

Thanks for reading.  By all means follow me on Instagram if you’d care to: Ralph, Exmoor Jack Russell